From the press release. (See also the official order, which is much more detailed and contains supporting material.) 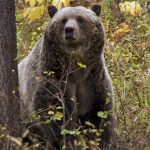 The order requires all attractants to be stored in an acceptable manner when unattended.  Attractants can include, but are not limited to;

Acceptable methods of food storage include;

As always, there is inherent risk to recreating in bear country and it is vital that everyone does their part to be Bear Aware and Recreate Responsibly.  It is often said, “a fed bear is a dead bear.”  Please don’t be responsible for a bear becoming conditioned by receiving human food rewards. For more information on approved bear-resistant containers please visit the Flathead National Forest website.