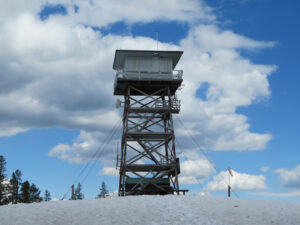 Delayed by the slow melt-out due to record cool temperatures in May, we decided to see if we could get to Cyclone Lookout on June 1. We actually got all the way to the top! The first mile is now cut out, including five or six trees blocking the road that forms the first half-mile of Trail 40 on its way to the summit. . UPDATE on June 8: All blow-downs have been cut out. The trail is completely clear.

As we were getting ready to leave the lookout, a Customs and Border Patrol helicopter circled in and dropped off a couple of folks to perform maintenance on their repeater up there.